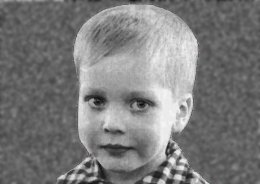 Viktor Matthey was only 6 years old when he died of cardiac arrest due to hypothermia after adoptive parents Robert and Brenda Matthey locked him overnight in a damp unheated pump room. Viktor was also severely beaten by his adoptive father. The Matthey’s attended a Pentacostal church and homeschooled their four biological children; beginning in September 2000 they sent their four biological children to a church school so that they could focus on their three adopted children. The Mattheys had adopted Victor and his younger twin brothers, aged 4, because they believed that God had called them to do so in an effort to alleviate an international orphan crisis. Both Robert and Brenda were sentenced to 10 years in prison for confining Viktor to a pump room, 10 years for excessive corporal punishment, and 7 years for failing to provide medical care. The sentences run concurrently. Viktor, along with his biological twin brothers, was adopted from Blagoschevensk, Amur, Russia, only 10 months before his death. The twins were later adopted by Robert’s mother, who has disavowed her son. Both Mattheys were released from jail in Fall of 2008.